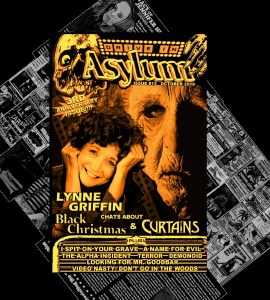 DRIVE-IN ASYLUM #13 is here! Our third anniversary issue is bursting with sinister intent and the pulpy newsprint nostalgia you've come to love about DIA. We're so pleased to bring you an interview with Lynne Griffin. An accomplished stage actress, Lynne's film credits include legendary slasher pioneer "Black Christmas" from 1974, as well as 1983 cult classic "Curtains", which has been building its own reputation thanks to a recent HD blu ray release from Synapse Films.

Filmmaker/author Bret McCormick returns in this issue, this time with a memoir about how his childhood years as a "monster kid" led to his pursuit of a career in the movies. Stephen Pytak has a critical retrospective of the "I Spit On Your Grave" franchise, and Victor C Leroi's Video Nasty series takes on 1981 slasher "Don't Go In The Woods".

In the spirit of the season, newcomer Robert Freese (from Scary Monsters and Videoscope) examines the rare 1979 novelization of "Halloween", as well as its connection to 1981 sequel "Halloween II" and the influence its ideas had on later films in the franchise. Another newcomer, Paul Werkmeister, comments on 1972 occult flick "A Name For Evil".

Many of our usual suspects also return with reviews, including Lana Revok, Sam Panico, Dustin Faloonand Mike Haushalter with reviews of "Looking For Mr. Goodbar", "Demonoid", "Terror", "Dunwich Horror", and "The Alpha Incident".