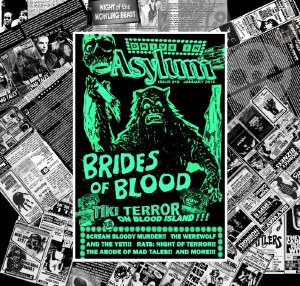 Issue #10 of DRIVE-IN ASYLUM brings some welcome relief from winter by taking us to Blood Island, where all sorts of awful things are happening to the local flora and fauna. Well, Dustin Fallon will tell you all about it when he discusses the late 60s tiki monster freakout BRIDES OF BLOOD.

Victor C. Leroi's Video Nasty series now takes on THE WEREWOLF AND THE YETI starring Paul Naschy, which got called out for its explicit gore in the notorious UK crackdown on violent videocassettes.

Sam Panico unearths Bruno Mattei's RATS - NIGHT OF TERROR from 1984, which predicts a rather unpleasant version of the future for planet Earth.

We're also featuring an interview with El Paso independent filmmakers JH Rood and Alex Lopez. These guys make movies just for the fun of it, and their latest is just about to be unleashed, THE ABODE OF MAD TALES.

Lana Revok from Facebook page STARTS TODAY! contributes a gallery of killer doll movies sure to freak out all you doll-o-phobes.

Also featured is a profile of the 1972 low budget nightmare flick SCREAM BLOODY MURDER, which is perhaps better known under the alternate title MY BROTHER HAS BAD DREAMS.

And of course there are tons of newsprint ads to look at, with a number of themed galleries for you to dig into, including a new ALSO KNOWN AS gallery of retitled movies.