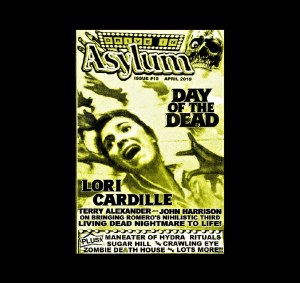 Return to a bygone era of filmmaking and film marketing with quarterly fanzine DRIVE-IN ASYLUM. Get in touch with the lost aesthetic of newsprint advertisements for film curiosities. These ads once brought a jolt of the forbidden to us in our daily newspapers, and they return to the printed page in DRIVE-IN ASYLUM. The written features in DRIVE-IN ASYLUM are focused on classic eras of horror, exploitation and cult films, including movie reviews and commentary written by genre fans, and interviews with the actors and filmmakers who created them.

DIA #15 features three members of the cast and crew from George A. Romero's 1985 zombie flick DAY OF THE DEAD! Actors Lori Cardille and Terry Alexander reminisce about their experiences making the movie, and composer John Harrison gives some insight into creating the film's unique soundtrack.

There are lots of great ads in this issue too, including galleries devoted to Peter Cushing films, 50s sci-fi shockers, and much more!