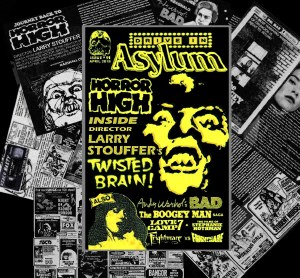 DRIVE-IN ASYLUM's April 2018 is here! Our #11 has some great content that we're very excited about, including four different authors making their DIA debuts!

We start with an exclusive interview with "HORROR HIGH" director Larry Stouffer. No, no, it's not "RETURN TO HORROR HIGH" from the late 80s, this is the 1973 movie where a nerdy high school biology wiz develops a serum that transforms him into a monstrous alter-ego that destroys his enemies. Larry talks to Marshall Crist about the film's development from conception to casting, post-production and its release to theaters via Crown International. Marshall makes his DIA debut with this great piece.

Also new to DIA is Ryan Clark, who offers his interview with screen writer George Abagnalo, who co-wrote "ANDY WARHOL'S BAD". George talks about his association with Warhol and the creation of this shocking satire of suburban America, featuring a cast of sociopathic characters who all have the worst intentions.

Sam Panico compares two movies titled "Frightmare", one from 1974 and the other from 1983. Victor Leroi's Video Nasty column features Nazi exploitation flick "Love Camp 7", and Lana Revok from Facebook page STARTS TODAY! has an ad gallery of great vintage video store ads to take ya back.

And of course there are tons of vintage movie ads to look at in this issue.