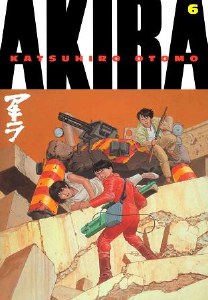 Fans have been waiting with eager anticipation to learn what they could expect from Kodansha Comics, the newest manga publisher to hit the U.S. One of their first publictions will be a reprint of Akira, the classic manga that changed the way a generation viewed comics and animation. Vast, epic and intricately detailed, Akira tells the story of two friends, Tetsuo and Kaneda, who become rivals when a mysterious drug turns Tetsuo in a deranged psychic powerhouse. The story takes place in the year 2019 in Neo-Tokyo, the city that arose from the ashes of Tokyo. Tokyo's destruction triggered World War III, and the public doesn't know what caused it. But Tetsuo and Kaneda are on a path to uncover the truth, and that path will lead them to the dangerous experiment known only as... Akira.