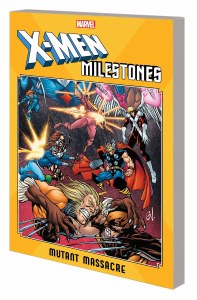 The biggest and best adventures of Marvel's mighty mutants - these are the X-Men Milestones! The Morlocks: a community of mutant outcasts living beneath the streets of Manhattan. The Marauders: professional mutant assassins, employed by a mysterious evil to wipe out the Morlocks! Between the two stand some of Marvel's most heroic: the X-Men, X-Factor, the New Mutants, Power Pack, Daredevil and Thor! But taken by surprise by the Marauders' overwhelming onslaught, can these disparate heroes hope to save any of the Morlocks? And even if they can, what will be the cost? Be there as the X-Men are shattered, Thor is grievously wounded and the Angel is changed forever! Collecting UNCANNY X-MEN (1981) #210-214, X-FACTOR (1986) #9-11, NEW MUTANTS (1983) #46, THOR (1966) #373-374, POWER PACK (1984) #27 and DAREDEVIL (1964) #238. Rated T