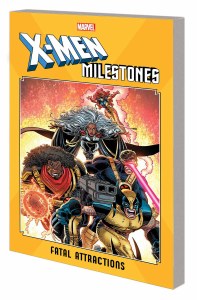 The biggest and best adventures of Marvels mighty mutants these are the X-Men Milestones! As Magnetos Acolytes amp up their attacks on Homo sapiens everywhere, the X-teams join forces to put an end to the villainous zealots mad crusade once and for all. But has their leader, messianic madman Magneto, returned from the dead? And as a mysterious and fatal disease begins creeping through the mutant community, which X-Man will lose a loved one and buckle under the strain? Tensions come to a head in the most shocking way possible, culminating in a devastating attack on Wolverine and a showdown between Professor X and Magneto that must be seen to be believed! Collecting UNCANNY X-MEN (1981) #298-300, #303-304 and #315; X-FACTOR (1986) #92; X-FORCE (1991) #25; X-MEN UNLIMITED (1993) #2; X-MEN (1991) #25; WOLVERINE (1988) #75; and EXCALIBUR (1988) #71. Rated T