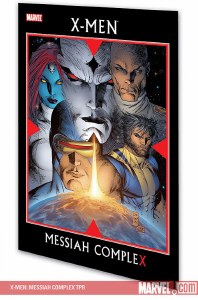 "Easily the best X-Men crossover in over a decade." - IGN.com

In the aftermath of HOUSE OF M, DECIMATION and ENDANGERED SPECIES, the future of mutants has never been bleaker. At the seeming end of their evolutionary cycle, a miracle arrives in the form of the first mutant birth since the tragic events of M-Day, when the Scarlet Witch obliterated the X-gene from virtually every mutant on the planet. But from this source of hope comes a clash between mutants over who will control the child's fate. It is a battle in which every mutant on the planet has a stake. The fight is on. The combined effort of several of Marvel's top creators, X-MEN: MESSIAH COMPLEX mines the rich tapestry of the X-Men Universe for a dizzying thrill-ride of suspense that will set a new course for the future of mutantkind. Collecting the X-MEN: MESSIAH COMPLEX one-shot, Uncanny X-Men #492-494, X-Men #205-207, New X-Men #44-46 and X-FACTOR #25-27.