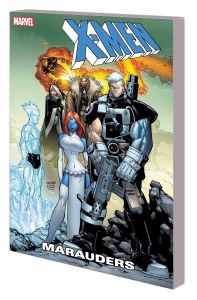 Mike Carey reinvigorates the X-Men! A shaken Sabretooth arrives at the X-Mens doorstep asking for asylum! But what could possibly strike terror into the heart of Victor Creed? The Children of the Vault have risen...and they spell doom for the X-Men! Rogue must assemble a dangerous new squad including Mystique, Cable, Lady Mastermind and Sabretooth but when a terrifying alien threat emerges, can Rogue hold on to her sanity? Meanwhile, the deadliest foes in the X-Mens history, the Marauders, return and Gambit is front and center among their ranks! Why are the Marauders eliminating specific mutants? And what prize do they plan to rip from the X-Mens hands? Its an exciting new direction for the X-Men that sets up the status quo for the Messiah Complex event! Collecting X-MEN (1991) #188-199 and #200-204 (A STORIES) and X-MEN ANNUAL (2007) #1. Rated T+