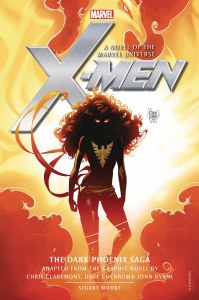 Jean Grey pilots a shuttle through a solar flare, saving the X-Men, and is possessed by one of the universe's greatest forces-the Phoenix. As she adapts to her new powers, the X-Men launch an assault against the clandestine Hellfire Club. Jean is tricked into betraying the X-Men, becoming first the Black Queen and then Dark Phoenix, wielding the power to destroy worlds. Only the X-Men can stop her.