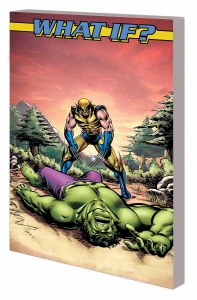 Classic stories reimagined in wild and wonderful ways by legendary creators! Imagine...what if Gwen Stacy had lived? What if Captain America was elected president? What if Phoenix had not died? What if Wolverine had killed the Hulk? What if there were no Fantastic Four? What if Bullseye had not killed Elektra? What if the Avengers were the last super heroes on Earth? And perhaps most startlingly of all, what if Dazzler became the herald of Galactus?! Plus, years before the Clone Saga rocked Peter Parkers world, what if Spider-Mans clone had survived? And yet more trips into the infinite possibilities of the Multiverse featuring Thor, Man-Thing, Ghost Rider, Iron Man and Matt Murdock, Agent of S.H.I.E.L.D.! Plus: The hidden history of the Eternals...and a classic all-comedy issue exploring the wildest What Ifs of all! Collecting WHAT IF? (1977) #24-35. Rated T