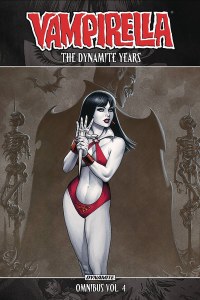 A stunning new collection featuring 4 of the best Vampirella mini-series ever published - including a classic tale by the legendary Alan Moore! Included are: Vampirella and the Scarlet Legion by Joe Harris and Jose Malaga: When an ancient prophecy of doom is uncovered and a new push to resurrect the foulest demons from the pit is revealed, it's clear Vampirella won't be able to take them on alone. Enter THE SCARLET LEGION, assembled to keep the dark things at bay and protect this world from the evils which lie beyond. The only question is, will they see Vampirella as friend... or foe? Vampirella vs. Dracula By Joe Harris and Ivan Rodriguez: Spinning out of Alan Moore's retelling of the ageless horror classic, Dracula has come to America to play out his timeless narrative in this brave, New World. Only he didn't realize ANOTHER vampire already beat him to it. Drawn to one another across continents and centuries by a mysterious force, both Vampirella and Bram Stoker's immortal monster find themselves sucked into a time-tossed epic of love, hate, death, and damnation. But can an epic built for one vampire possibly hold them both? The New European by Alan Moore and Gary Frank: Featuring Alan Moore's legendary work on Vampi and his tale of Dracula in America! The Red Room by Dan Brereton and Jean Diaz: Vampirella and a colorful, driven lawman track vampires on a blood-letting rampage through rural Arkansas to the Red Room, an underground circuit where high rollers stage mortals vs. monster death matches. She faces a host of fiends, quickly realizing more arcane forces drive the bouts and their frenzied combatants, enhanced with a powerful, corrupting essence, firmly stacking the odds against Vampirella surviving the night.