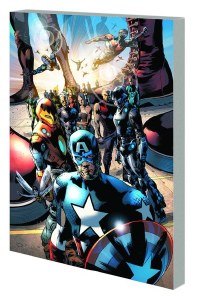 The beginning of the end?

They are the greatest heroes the world has ever known: Captain America, Iron Man, Thor, Hulk, Wasp, Giant Man, Hawkeye, Black Widow, Quicksilver, Scarlet Witch. They've saved the world from alien invasion, becoming international celebrities and America's champions, but now all that's about to change. Can the Ultimates survive the Hulk's execution, Thor's imprisonment and the advent of the Ultimate Defenders?!

On the eve of Tony and Natasha's wedding, Nick Fury makes his move against the mysterious traitor that's been plaguing the team - and the Ultimates will never be the same! The world's greatest heroes are in for the battle of the century, and not all of them will be walking away.