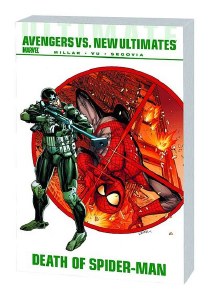 When Earth's mightiest heroes collide, will Spider-Man pay the ultimate price? Plans for America's next generation of Super-Soldiers have been stolen and sold to the highest bidder.

While Carol Danvers and the Ultimates blame Nick Fury, the leader of the Avengers, for the theft, the black-ops mastermind believes Danvers herself to be the culprit.

The teams' mistrust erupts into violence as Captain America, Iron Man, Thor, the Punisher, War Machine and more collide in the middle of New York City. And Spider-Man is caught in the crossfire!