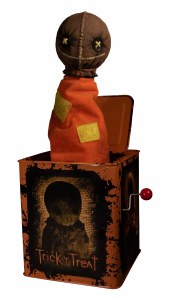 Mezco's Burst-A-Box is a pop culture infused twist on one of the most beloved, classic toys, the jack-in-the-box. The Trick 'r Treat Burst-A-Box features Sam: part pumpkin, part supernatural being. Sam is the enforcer of the rules of Halloween and shows no mercy to those who disrespect his holiday. This fully functioning jack-in-the-box is approximately 14" tall when "popped". The Burst-A-Box features a detailed head sculpt and a clothed spring body, all encased in a tin music box. Designed after his appearance in the film, Sam features a burlap sack head sculpt with button eyes and orange pajamas.