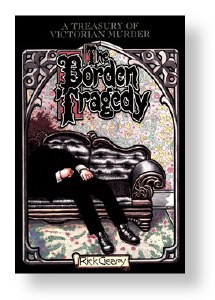 "Lizzie Borden took an axe, gave her mother forty whacks, when she saw what she had done, she gave her father forty-one!" In this third volume of Geary's Treasury, the famous Lizzie Borden double murder is explored with as much attention to well -researched detail as in his Jack the Ripper. This is another celebrated murder of last century, the one that lead to the infamous school rhyme.
The parrallel between this old case and OJ Simpson's is striking: both defendants had unblemished reputations; the double murders were gruesome; there were no witnesses and no weapons found; the cases took the media by storm. Both wealthy defendants hired expensive lawyers who convinced the jury of reasonable doubt. Both remain under a cloud of suspicion...
“Geary returns with another typically superlative work...Artfully precise reconstruction...A delight!” Publishers Weekly starred review.
"This is the primer on a perpetually fascinating, unsolved mystery." Booklist
"This should be an instant hit in high interest/low reading collections."