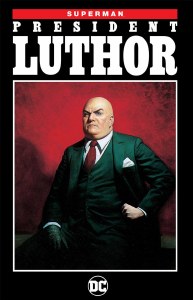 Lex Luthor is the most powerful man in Metropolis. So what's next on his horizon? The White House, naturally! It was only a matter of time before billionaire Lex Luthor ran for the highest office in the land. And besides bringing him victory, Luthor's campaign for the presidency is calculated to bring maximum grief to the Man of Steel. This title collects SECRET FILES: PRESIDENT LUTHOR #1, SUPERMAN #162-163, SUPERMAN: THE MAN OF STEEL #110, SUPERMAN: LEX 2000 #1, LEX LUTHOR: THE UNAUTHORIZED BIOGRAPHY #1, plus content from ADVENTURES OF SUPERMAN #581 and #586, SUPERMAN #164-165 and SUPERMAN: THE MAN OF STEEL #108-109.