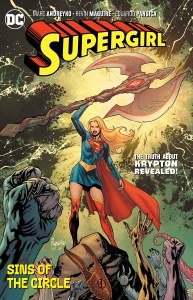 Supergirl's search for the truth about who ordered the destruction of Krypton has taken her into the far reaches of space, depleted her superpowers and caught her in a war with the vicious Citadel.

But Kara is not completely defenseless. She has allies, like the Omega Men and the mysterious Coluan named Z'ndr Kol. She has the axe of Rogol Zaar, which both feeds on and feeds into her rage.

And soon she'll have the answers she's been seeking. Appa Ali Apsa, the rogue Guardian of the Universe who helped form the group known as the Circle, hid his confession in a series of gems, which he then scattered across the universe. It's Supergirl's destiny to ﬁnd them and unlock the secrets of the Circle...including who sent Rogol Zaar on his mission to destroy Krypton, and why.

What price will Supergirl pay for learning the truth...and once she ﬁnds out who murdered Krypton, what will she become in order to exact vengeance?

Fans of the Supergirl TV series shouldn't miss this story that explores the heart of Kara's character, from writer Marc Andreyko (BATWOMAN, MANHUNTER) and artists including Kevin Maguire (JUSTICE LEAGUE) and Eduardo Pansica (THE CURSE OF BRIMSTONE). Collects SUPERGIRL #27-33.