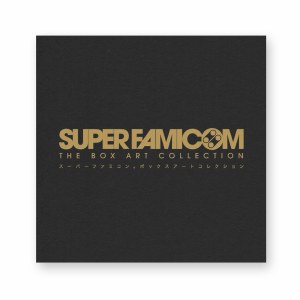 It wasn't easy being a Nintendo fan in the early 90s: the wonderful Super Famicom was released in Europe as the Super Nintendo Entertainment System, but it was hobbled by a bordered, 50Hz image and delayed release schedule. True Nintendo fans got hold of a Japanese console and bought their games on the grey import market.

As well as the benefits of faster, smoother, full-screen gameplay, Japanese Super Famicom cartridges came in beautiful portrait-shaped boxes, rather than the landscape packaging sold in Europe and North America. The stylish, intricate Japanese designs were almost always superior to that afforded the western releases.

As a celebration of this unique artwork, Bitmap Books is proud to present Super Famicom: The Box Art Collection - a compilation of Japanese game packaging, professionally shot and presented as a glorious hardback edition. The book features around 250 titles, including many rare examples and some that have never before been documented in print. Sourced from the archives of renowned collector, Stuart Brett (aka Super Famicom Guy), each box is beautifully presented life-size, with a critique of the artwork, plus interviews with other collectors, explaining their love of the format.

Super Famicom: The Box Art Collection is an unmissable treat for anyone who had a passion for Nintendo's 16-bit games console, and who came to embrace the distinctive Japanese artwork adorning these iconic games.