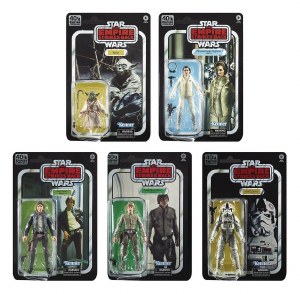 Star Wars The Black Series The Empire Strikes Back 40th Anniversary Vintage 6-Inch Action Figures bring back the legends that continued the saga. Classic movie characters are here, and the iconic collectible figure line has been modernized and enlarged with incredible sculpts and accessories, on vintage-style packaging from Hasbro! Ages 4 and up.

You'll find the greatest characters from the original Star Wars sequel on packaging very much inspired by the classics. It would be unwise to skip this assortment, and the early bird catches the worm with this remarkable collection!