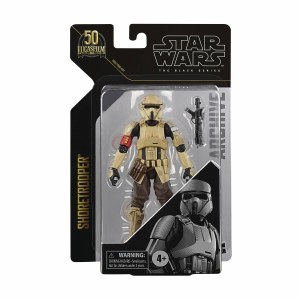 The Star Wars saga captured the hearts of millions with iconic characters, impressive vehicles, and a galaxy of stories that has passed the test of time again and again. Commemorate the first 50 years of Lucasfilm with figures from the Black Series Archive collection, inspired by the original Star Wars trilogy! Specialist Stormtroopers stationed at the top-secret Imperial military headquarters on Scarif, Shoretroopers patrol the beaches and bunkers of the planetary facility. This Star Wars The Black Series action figure comes with a entertainment-inspired blaster accessory that makes a great addition to any Star Wars collection.