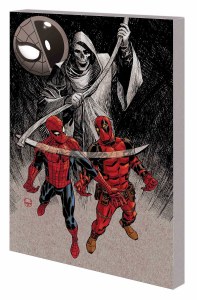 The biggest event in Marvel Comics history honest! The Infinite House of Civil yet Secret Crisis War Invasions will shake the foundations of the Marvel Universe and nothing will ever be the same! And its up to Spider-Man and Deadpool to save the day if they can make it back from the Negative Zone in time, that is! But who is the new, mysterious and omnipotent villain who has somehow restored the fourth wall? And if he can stop Deadpool from seeing and talking to the readers, what else can he do?! Prepare for a battle of epic proportions, because the danger is coming from the other side of the page! Not a hoax! Not a dream! Not an imaginary story! This is the event that could end all events! Collecting SPIDER-MAN/DEADPOOL #46-50. Rated T+