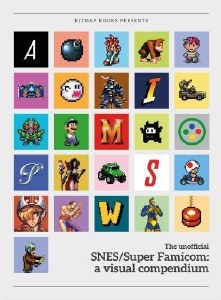 It would be a massive understatement to say that the Super Nintendo had a formidable act to follow when it arrived at the dawn of the 1990s. Nintendo's previous console the NES (or Famicom as it was known in its native Japan) enjoyed seven years of almost unrivalled dominance following its initial launch in Japan in 1983 and had almost single-handedly rehabilitated the home video game market, turning Nintendo into a household name across the globe.

Focussing on the Super Famicom in Japan and the SNES across North America and Europe, SNES/Super Famicom: a visual compendium offers a visual snapshot of the best games, developers, box art and product design from across these territories. As the name suggests, the book is mainly visual; it won't be a super-detailed insight into the SNES/Super Famicom, but more a visual companion designed to stir up excitement and nostalgia for this fantastic machine and its legacy of classic games.

The book measures 170mm x 230mm and is printed lithographically to the highest standards. This ensures that colours in the book are really vibrant and pages have a high-quality, luxurious feel to them. As standard, all visual compendiums now come with a spot varnished cover and a spot varnished protective dust jacket. The binding is 'thread sewn' which means that the book can lie flat so the imagery can be fully enjoyed. The binding does not use glue which can crack over time and result in loose pages. Thread sewn binding is the best available.

SNES/Super Famicom: a visual compendium comes as a hardback edition and 500+ pages long. It also comes with four Super Famicom coloured bookmark ribbons and a 3mm protective board slipcase which has a lenticular fascia and is shrink-wrapped.