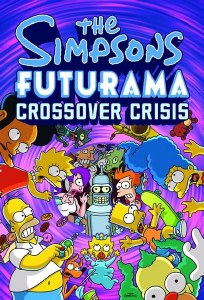 Prepare yourself for a Simpsons saga filled with Futurama! A Futurama fable suffused with the Simpsons! This is the epic story that you've been waiting for, a story so big that it can only be told in a large format, slip-cased edition, complete with new material, supplemental stories, preliminary sketches, character designs, and a pin-up gallery featuring the talents of comics industry luminaries.

First published in 2002 and 2005 as two two-part comic book mini-series, these four hard-to-find comics are collected together for the first time in a hardcover collection, encased in a double diecut slipcase, and packaged with a bonus facsimile reprint of the Eisner Award-winning Simpsons Comics #1 from 1993.