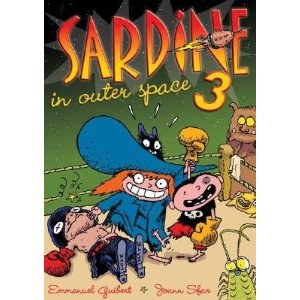 The youngest and spunkiest girl in outer space is back and ready to play!
Supermuscleman and Doc Krok are at it again, and it's not just the galaxy they're out to ruin it's Sardine and Little Louie, too! Get ready for the ultimate match-up as wits battle brawn in the best bout of this series. Yes, that's right it's the Space Boxing Championship! The fearless cousins must go head to head with Supermuscleman, Chief Executive Dictator of the Universe, shrunken to enter the kids' matches, but just as muscley. And that's only the first of the ten stories contained in this book.
In a starred review of the first Sardine volume, Kirkus Reviews proclaimed, "With non-stop action [and] humor geared to multiple levels of cultural awareness . . . readers will find that, as Supermuscleman sneers shortly before gorily blasting his own foot, 'Resistance is futile.'"