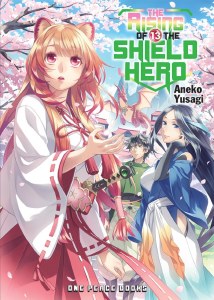 Rising of the Shield Hero Vol 13

After they were summoned to another world, the other three heroes persist in behaving as if they are playing a game. But the Shield Hero, Naofumi Iwatani, finally convinces them to change their ways and make them face reality. Later, after a journey riddled with difficulties, Naofumi and crew finally arrive in Q’ten Lo, a country that has made repeated attempts on Raphtalia’s life. They initially infiltrate the country with the intention of making its inhabitants pay for its tyrannical actions, but it turns out that even its own citizens are suffering as a result of incompetent rulers. “We’ll start by bringing assistance from Siltvelt to the town, and then it’s a charge to victory!” They start a rebellion to overthrow the government. But right in the middle of it, Naofumi and his crew’s abilities are nullified by mysterious weapons designed for use against the heroes! What will their fate be?! What will become of their raid on this uncharted land?! Find out in volume thirteen of this otherworldly revenge fantasy!