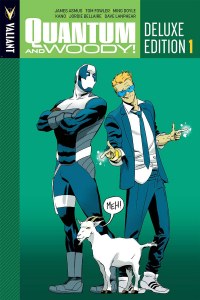 The most nominated series of the 2014 Harvey Awards! From award-winning writer James Asmus (Thief of Thieves, Gambit) and artists Tom Fowler (Venom), Ming Doyle (Mara), Kano (Gotham Central), and more, the origin of the world''s worst superhero team starts right here in Quantum and Woody''s first deluxe oversized hardcover collection! Once upon a time, Eric and Woody Henderson were inseparable. Adopted brothers. Best friends. Brilliant minds. Years later, they are estranged siblings, petty rivals, and washedup failures. But when their father''s murder leads them into the throes of a life-altering scientific accident, Eric and Woody will find themselves with a whole new purpose - and a perfectly legitimate reason to wear costumes and fight crime. Go big or go home, folks! Quantum and Woody are coming! Collecting QUANTUM AND WOODY #1-12 and QUANTUM AND WOODY: THE GOAT #0, the Quantum and Woody Deluxe Edition Book One oversized hardcover also features more than 20 pages of special features, including rarely seen designs, artwork, and behind-the-scenes bonus material by Tom Fowler (Hulk:Season One), Ming Doyle (Mara), Andrew Robinson (The Fifth Beatle), Ty Templeton (Batman ''66), Ryan Sook (Seven Soldiers) and many more!