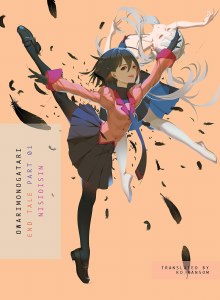 From the best selling novel series comes the latest book of the final season of the Monogatari Series.

Before we witness the series’ climactic showdown in the third volume of the End Tale—each part of which forms its own cohesive whole—narrator Araragi wrestles with a crucial bit of history that had turned him into the loner we met at the very beginning, who opined that friendships only lowered his
intensity as a human.
What initiates his pilgrim’s progress of a reckoning is his first encounter, at school, with the mysterious freshman Ogi Oshino, self-described niece of the equally enigmatic aberration expert Mèmè, and the book’s opening chapter is a harrowing standalone novella of a who-dunit involving a locked room of sorts.
Our increasingly well-adjusted hero kept on beingdecent at one thing even when he was just hanging on, but this forte, an unlikely aptitude for math, of all things, becomes the focus of a cheating scandal and a web of recollections that forces him to come to terms with, what do you know, his capacity to connect to people.