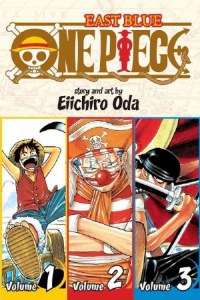 High jinx on the high seas! Buy three volumes of One Piece for the price of two!

As a child, Monkey D. Luffy dreamed of becoming the King of the Pirates. But his life changed when he accidentally gained the power to stretch like rubber- at the cost of never being able to swim again! Now Luffy, with the help of a motley collection of pirate wannabes, is setting off in search of the "One Piece," said to be the greatest treasure in the world!


Vivi's Adventure: With all the Officer Agents defeated, only Crocodile and his final plan to destroy the palace stands in the way of peace. While Luffy battles it out with the evil Croc in the royal tombs, Vivi and the rest of the Straw Hats have to find the bomb before it blows up the capital--with everyone in it!