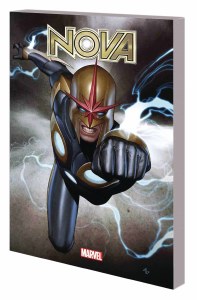 Dan Abnett and Andy Lanning propel the Human Rocket to glory! When the horrifying Annihilation Wave swarms across the cosmos, Richard Rider, the man called Nova, must step up - and become one of the galaxy's greatest heroes! In the wake of the chaos, a desperate cosmos cries out for law and order. But can one lone human being police an entire universe? Join Nova on the road to Knowhere - but what will he find there? And who is...Cosmo? Rich will barely have time to catch his breath before another Annihilation event begins, with a deadly race on a quest for conquest! And will Nova find love with Gamora, the deadliest woman in the galaxy?! All this, and Galactus too! Collecting ANNIHILATION: NOVA #1-4, NOVA (2007) #1-15, NOVA ANNUAL (2008) #1 and material from NOVA: THE ORIGIN OF RICHARD RIDER.