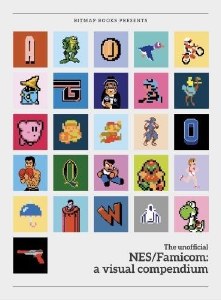 With its cutting edge graphics and extensive catalogue of iconic games, the NES/Famicom played a huge part in the history of videogaming.

Nintendo’s console stormed onto the market and immediately raised the bar with classic titles such as Donkey Kong, Super Mario Bros., Mega Man, The Legend of Zelda, Final Fantasy, Fire Emblem and many more. Over the course of its 20-year lifespan the console sold in excess of 60 million units, making Nintendo a household name, and introducing youngsters everywhere to a whole new world of characters and stories. For many, this would be a turning point in their lives, leading them to become artists, game designers and programmers. It helped to popularise manga and anime among Western gamers, and brought icons of Western culture into Japanese homes. Nintendo’s little 8-bit console changed the world of entertainment forever, and its influence cannot be overstated.

NES/Famicom: a visual compendium aims to showcase the very best pixel art, box art and product design on each system. Spread over 512 pages, it features more than 170 classic games, with articles on the leading developers, interviews with key figures in the industry and mini-features on subjects such as packaging, fan art and unreleased games.

Each book comes in a 3mm protective board slipcase which has a lenticular fascia and is shrink-wrapped.
Book specifications

Book version
This is the second edition of NES/Famicom: a visual compendium. Latest version includes small edits made to the Nintendo feature to reflect the demise of the Wii U, introduction of the Switch and of course the NES Classic Edition. Typographically, we have updated the contributor entries to now include their role in the game or profession, to be in-line with more recent visual compendiums. We have also removed the gatefold pages.