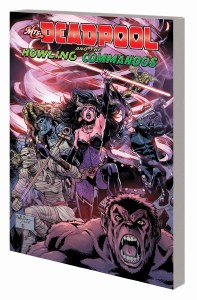 Her name is Shiklah - undisputed queen of the Monster Metropolis below Manhattan! In the world that was, she married Deadpool. But nothing on Battleworld is as it was. Now, Shiklah commands the Howling Commandos: Werewolf by Night! Frankenstein's Monster! The Living Mummy! Man-Thing! Marcus the Centaur! Shiklah is setting out to avenge the death of her brothers - by slaying Dracula! Her quest will lead the Commandos through the land of the undead and into the uncanny realm known as Weirdworld - but how will the Monster Metropolis survive Dracula's wrath when the horrifying showdown begins? Whatever would Shiklah's late husband think of all this? Maybe you should ask his ghost! Plus: A hair-raising classic tale of Werewolf by Night! Collecting MRS. DEADPOOL AND THE HOWLING COMMANDOS #1-4 and WEREWOLF BY NIGHT (1972) #1.