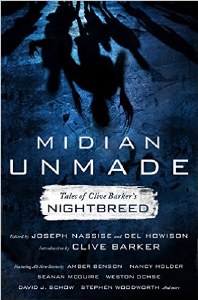 Clive Barker's Nightbreed has been controversial since the moment it was released in a version edited by the studio and roundly condemned by Barker, who wrote and directed the film. A virtually instant cult film, Nightbreed--based on Barker's novella, Cabal--was nominated for three Saturn Awards and won several prizes at European film festival.

The impact of Nightbreed goes beyond the screen; along with Cabal and Barker's seminal The Books of Blood, it has inspired many horror writers, some of whom have gathered in this tribute anthology.

Midian Unmade tells the stories of the Nightbreed after the fall of their city, Midian. Driven from their homes, their friends and family members slain before their eyes, the monsters become a mostly-hidden diaspora. Some are hunted; others, hunters. Some seek refuge. Others want revenge.

With an introduction by Clive Barker, this is an outstanding collection of original horror short stories in a dazzling variety of styles.