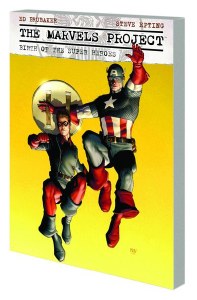 Witness the birth of the Marvel Universe through the eyes of one of its own Golden Age heroes! As the dashing Angel fights crime in the streets of pre-wartime America of the 1930s and '40s, he witnesses the rise of an entire generation of titans - of fiery men, undersea kings and inspiring soldiers.

Will these Marvels be enough to fight back the onslaught of World War II - including the Nazi's own super-soldier, the Red Skull?

The beginning of the Marvel Age of Heroes is documented in this fast-moving and shocking tale from the mind of writer Ed Brubaker.

This title collects
THE MARVELS PROJECT #1-8