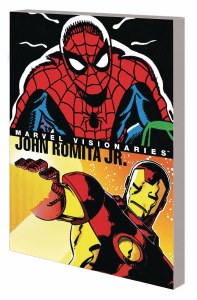 Celebrate the career of a true Marvel Visionary! John Romita Jr. followed in his famous fathers footsteps and soon become a legend in his own right! This volume collects some of JRJRs greatest hits, from his first Marvel work to the creation of a New Universe and more! Tony Stark battles alcoholism! Spider-Man battles the Juggernaut though the streets of New York! Colossus and Kitty Pryde break up! Daredevil and Kingpin celebrate Christmas! The Punisher joins the mafia! Professor X and Magnetos history is explored! Hulk smashes the Abomination! A masterful retelling of Daredevils origin! And more! Collecting AMAZING SPIDER-MAN (1963) #229-230, IRON MAN (1968) #128 and #256, UNCANNY X-MEN (1981) #183 and #309, STAR BRAND #1, DAREDEVIL (1964) #253, PUNISHER WAR ZONE (1992) #1, DAREDEVIL: THE MAN WITHOUT FEAR #1-2, INCREDIBLE HULK (2000) #25 and #34, AMAZING SPIDER-MAN (1999) #36 and material from AMAZING SPIDER-MAN ANNUAL #11. Rated T+