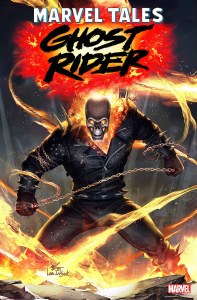 Johnny Blaze, the flaming-skulled Ghost Rider, roars into action as we celebrate the 80th anniversary of the House of Ideas with the era-spanning MARVEL TALES! This anthology series shines a spotlight on fan-favorite characters, features timeless stories and highlights some of our most impressive talent from the past eight decades. First, legendary scribe Roger Stern explores the curse of Johnny Blaze and the adrenaline-fueled origin of Ghost Rider in GHOST RIDER (1973) #68! Next, Spider-Man has one of his most hair-raising team-ups of all, joining Ghost Rider in action against the eye-watering villain called the Orb, in MARVEL TEAM-UP (1972) #15! Then, ask yourself What if Ghost Rider were separated from Johnny Blaze? in a thought-provoking tale from the classic alternate reality series, WHAT IF? (1977) #28! Lets ride! Rated T