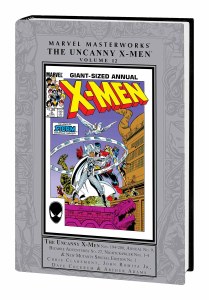 Chris Claremont, together with an absolute dream team of art talent John Romita Jr., Arthur Adams, Barry Windsor-Smith and Dave Cockrum brings you an indisputable Marvel masterwork! Beginning with the earthshaking return of the Juggernaut, tensions rise as Professor Xs health fails, a crisis of faith strikes Nightcrawler and Storm ranges across the African savannah in the second Lifedeath masterpiece! Meanwhile, the X-Men and New Mutants are whisked away to Asgard to battle Loki and his minions in the all-time great Asgardian Wars, illustrated by the incomparable Arthur Adams! Finally, the day of reckoning arrives as an international tribunal tries Magneto for crimes against humanity. Also featuring a swashbuckling saga starring Nightcrawler by X-Men icon Dave Cockrum! Collecting UNCANNY X-MEN (1981) #194-200, X-MEN ANNUAL (1970) #9, NEW MUTANTS SPECIAL EDITION #1, NIGHTCRAWLER (1985) #1-4 and material from BIZARRE ADVENTURES #27. Rated T