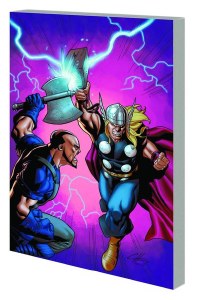 Captain America, Iron Man, the Black Widow, Thor, the Vision, Nova, and the Invisible Woman, a powerful collective of the greatest heroes the world has ever known. They are the Avengers, and they want it known they're here to stay.

Watch the all-ages action unfold when Captain America tries to take down the nefarious A.I.M. terrorist organization. Then see Thor battle the deadly Executioner aboard a pirate ship! And the Black Widow is forced to trespass into Prince Namor's domain in a desperate bid to save Tony Stark's life! Plus: Nova journeys to Asgard to do battle with troll kings, troll warriors and troll sorcerers!