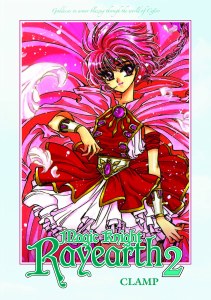 Umi, Hikaru, and Fuu have returned to Earth from Cephiro, but all three know they have been forever changed by their adventures there. Haunted by the decisions they made and the unresolved war between Zagato and Emeraude, the Magic Knights journey to Cephiro once more, this time with a sense of duty. But who was it that had the strength of heart to summon them again, if it was not the Princess Emeraude? Is it the person who, as Clef says, could replace her as the Pillar of Cephiro? o Magic Knight Rayearth was made into both an anime TV and OAV (direct-to-video) series, available in North America through Media Blasters and Manga Entertainment.