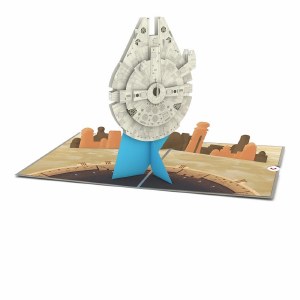 Star Wars™ and Lovepop have joined forces to create the Millennium Falcon™ pop up card.

The gray cover of the Star Wars Millennium Falcon pop up card features the laser-cut beige Corellian YT-1300f light freighter. The Millennium Falcon is flying across the cover with various colors in its tracks representing it blasting off.