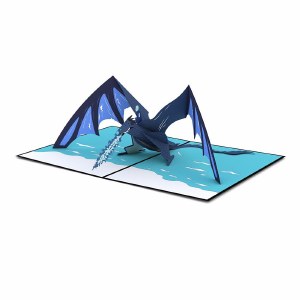 The true enemy won’t wait out the storm. He brings the storm.

HBO’s Game of Thrones and Lovepop have come together for the ultimate partnership, and we couldn’t be more excited about the results. Introducing The Night King and Viserion pop up card.

The black cover of the Night King and Viserion pop up has an intricate, blue laser-cut image of Viserion’s eye.

Inside The Night King and Viserion design, the Night King is shown riding atop Viserion, a dragon he has recently converted to join his White Walker army. The dragon is shown standing atop white and light blue snow, breathing blue fire obliterating anything in its way.