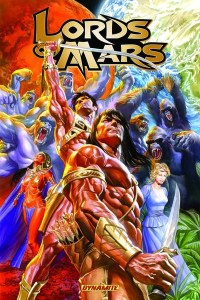 Two legends of science fiction and fantasy literature collide in an epic crossover event! Tarzan, the legendary Lord of the Jungle, has claimed his title as a British nobleman, but his very life is threatened when a hunting excursion among high society goes disastrously wrong. Meanwhile, John Carter, the Warlord of Mars, responds to a veiled threat from his defeated enemies. Though separated by millions of miles, these champions of Mars and Earth are drawn together by a sinister cult and manipulated into a deadly confrontation. With their lives and those of their beloved Jane and Dejah Thoris on the line, can these iconic heroes put aside their differences and survive the Thern plot... and a thousand rampaging White Apes? Includes a cover gallery of over a dozen cover editions from the Lords of Mars comic book series.