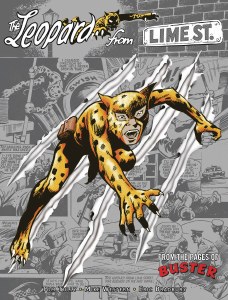 The Leopard from Lime Street is the British Spider-Man, a hugely popular home-grown teenage superhero! Billy Farmer lives with his Aunt Joan and Uncle Charlie in the when he is scratched by a radioactive leopard at the local zoo. Gaining leopard-like strength, speed, reflexes, and tree-climbing abilities, when he's not fighting crime, Billy sells photographs of himself to the local paper, using the money to support his frail aunt while contending with his violent, greedy, and lazy uncle. With warmth, wit, and stunning artwork, The Leopard from Lime Street is a gem of 1970s and 1980s British comics.