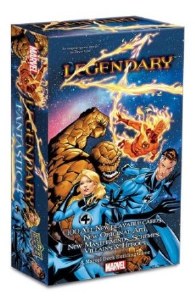 The Fantastic Four make their first appearance to the Legendary Universe!Players create their own powerful combos on the fly, combining their heroes awesome abilities to take down nasty Marvel Masterminds! Over the course of the game, recruit increasingly powerful Hero cards to add to your deck, building a stronger and stronger deck of the ultimate Marvel superhero combinations.The game will feature the classic Fantastic Four Heroes and Silver Surfer as they go to battle against the world eating Galactus! All New content consist of 5 heroes, 2 new villain groups, 2 new Masterminds to add to the Marvel Legendary Core Set Game.