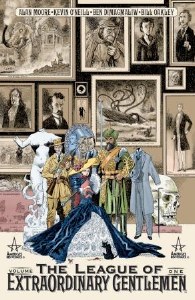 Proving that mainstream comics could be infused with past literary/cultural ideals and still be bestsellers, the America's Best Comics imprint took the dilapidated superhero genre and created three vastly entertaining hybrids with Tom Strong, Promethea and Top Ten. Now, a stunning coup de grace is delivered with this masterful pairing of Victorian adventure fiction's greatest characters and the old war-horse of the super-group. With the stunning The League of Extraordinary Gentlemen, it would be no exaggeration to say that Alan Moore has produced a near-perfect piece of adventure fiction that is clever, literate, rich with excitement and hard to put down.

It's 1898 and at the behest of M, the mysterious head of the secret Service, Campion Bond is dispatched to procure the services of Miss Mina Murray (nee Harker), adventurer Allan Quartermain, "Science-Pirate" Captain Nemo, Henry Jekyll (and his monstrous alter ego) and Hawley Griffin (a.k.a. the Invisible Man). Together, they must combat an insidious threat that will decide supremacy of the London skies, but their success may unleash a far greater threat. With no shortage of action, Moore and O' Neill sustain a high level of suspense, intrigue, mystery and terrific wit that all contribute to an indispensable read. O'Neill's art, so memorable in Marshal Law, produces a London filled with vivid, magnificent architecture and a malevolent atmosphere ripe with thrills and danger. An unmitigated triumph--pure and simple.