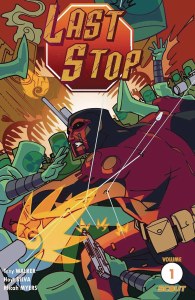 Special NONSTOP! Imprint trade paperback where Scout releases a World Premiere issue followed by the entire story in a collected volume at a special reduced price! Seven issues worth of art and story for the price of five! Time is ticking for the World's last superhero. Disillusioned, Lincoln Adams (a.k.a. Unstoppable) must make peace with the changing world around him-can there truly be a place for him in a world without Supers? After learning of his terminal disease, Lincoln sees an easy way out; however, the re-emergence of an old Arch-Nemesis, and a new shadowy masked figure, turn Lincoln's plans of an easy passing on their head. Can Lincoln stop this new threat before the disease stops him?