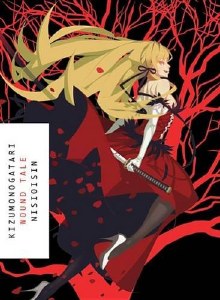 Around midnight, under a lonely street lamp in a provincial town in Japan, lies a white woman, a blonde, alone, robbed of all four limbs, yet undead. Indeed, a rumor's been circulating among the local girls that a vampire has come to their backwater, of all places.
Koyomi Araragi, who prefers to avoid having friends because they'd lower his intensity as a human," is naturally skeptical. Yet it is to him that the bloodsucking demon, a concept dated twice over," beckons on the first day of spring break as he makes his way home with a fresh loot of morally compromising periodicals.