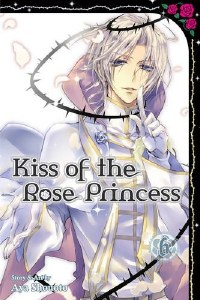 Kiss of the Rose Princess Vol 06

Anise Yamamoto has been told that if she ever removes the rose choker given to her by her father, a terrible punishment will befall her. Unfortunately she loses that choker when a bat-like being falls from the sky and hits her. Anise is granted four cards representing four knights whom she can summon with a kiss. But now that she has these gorgeous men at her beck and call, what exactly is her quest?!

High school student Anise Yamamoto is the Rose Princess of four handsome Rose Knights. The Gray Rose has revealed himself to be Mutsuki’s older brother, whom Mutsuki killed in the past. Mutsuki is slowly regaining his memories, but what do two Dark Stalkers want with Anise, the Rose Princess?