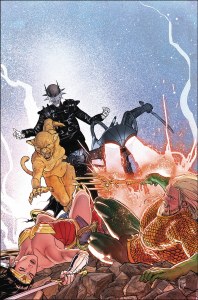 In this second Justice League collection, Hawkgirl takes wing against Legion of Doom leader Lex Luthor; John Stewart faces off with old foe Sinestro; the Flash must run down the Still Force-empowered Gorilla Grodd; and Wonder Woman tackles the tag team of Black Manta and Cheetahunderwater! Then, in Drowned Earth, the Justice League is scattered across the Seven Seas, pursued by the Ocean Lords and an army of alien mercenaries. Collects Justice League #8-12, JUSTICE LEAGUE/AQUAMAN: DROWNED EARTH #1 and AQUAMAN/JUSTICE LEAGUE: DROWNED EARTH #1.