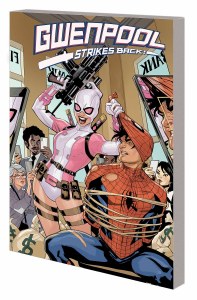 Everyones favorite comics fan turned comics character is back! Fresh from her stint as a West Coast Avenger, Gwen Poole is desperate not to disappear into comic book limbo, so shes determined to make an impact on the Marvel Universe! First up: unmask Spider-Man! Then, home-wreck the Fantastic Four! And while shes at it, why not defeat the Immortal Hulk and lift Thors hammer, Mjolnir! But as Gwens mad rampage continues, will we and she finally learn the truth about her origins? Is this Gwenpools greatest retcon yet? Either way, Gwen knows she needs to go big or go home! Buckle up, strap in and get ready! This is officially the greatest sequel with Strikes Back in the title thats ever been made! Collecting GWENPOOL STRIKES BACK #1-5. Rated T+